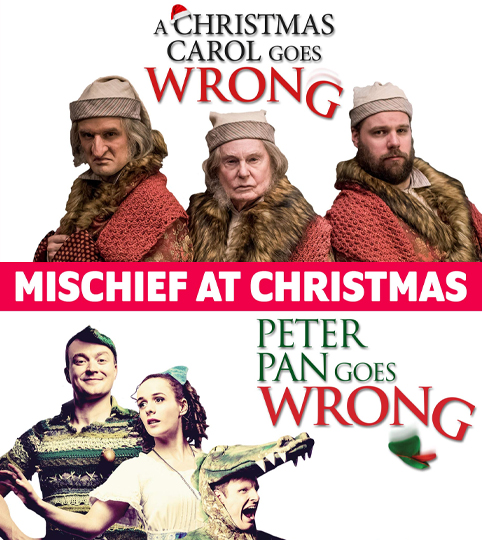 Order our double bill of Mischief at Christmas on Sky Store, Amazon, Apple, Google, Virgin, BT, Microsoft, Talk Talk and Chili. Currently only available in the UK - but stay tuned for more news!

Peter Pan Goes Wrong and A Christmas Carol Goes Wrong are also streaming now in the US, Canada and Australia on BroadwayHD.

Find out more about each of these shows below.

Peter Pan Goes Wrong: The Olivier Award-winning Mischief Theatre brings Peter Pan Goes Wrong to the small screen. As part of a commitment to community theatre, The Cornley Polytechnic Drama Society, an amateur dramatics group, has been commissioned to recreate the JM Barrie classic as part of the festive season programming. But can they pull it off? Narrated by David Suchet and filmed in front of a live audience, watch as Peter Pan flies through the air, Captain Hook and his pirates set adrift in the lagoon, and Tinkerbell is due to light up the stage in a stunning electrical costume... what can possibly go wrong?! With their trademark comic mayhem, expect hilarious stunts, chaos, technical hitches, flying mishaps and cast disputes on the way to Neverland with hilarious and disastrous results.

Christmas Carol Goes Wrong: The Olivier Award-winning Mischief Theatre Company return to the small screen with their take on Dickens's famous festive fable. Blacklisted by the BBC after ruining Peter Pan, the Cornley Polytechnic Drama Society do not take their ban lying down and force themselves back on the TV by hijacking the jewel of the Christmas schedule, a live production of A Christmas Carol, staged by a professional cast. As the Cornley gang try to make the show work on television, they soon realise they are completely out of their depth, with no idea how to direct a live studio or handle the special effects. Worse still, their internal rivalries are revealed on television, while an angry professional cast tries to get back into the studio.