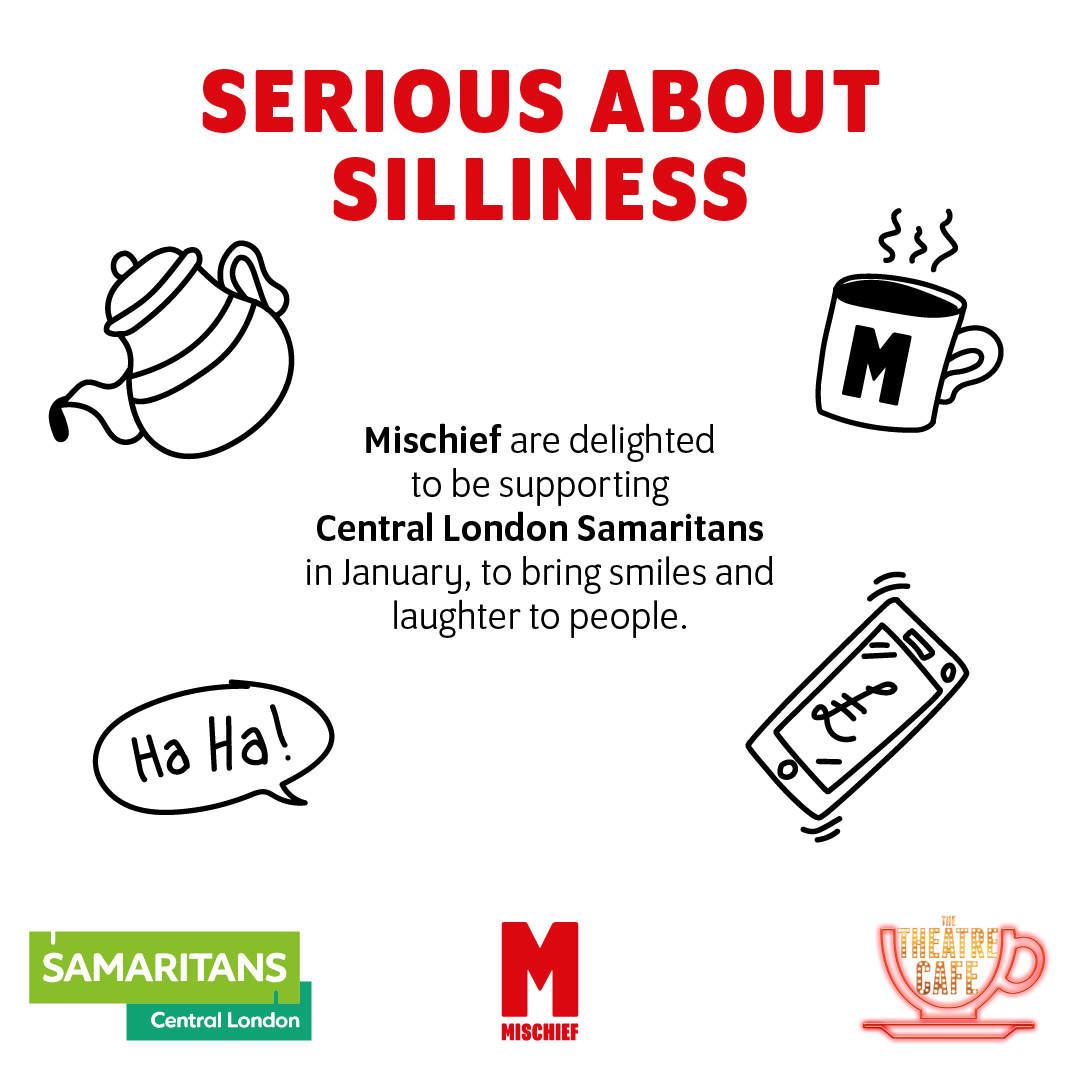 ‘THERE’S ALWAYS TIME FOR A CUPPA AND A CHAT’

Award-winning comedy creators Mischief are proudly supporting Central London Samaritans for Brew Monday, 17 January 2022, which encourages people to have a cuppa and a catch-up with those they care about.

Volunteers from Central London Samaritans and Mischief will have cuppas on hand in exchange for donations to the Samaritans at The Theatre Café on St Martins Lane, London WC2 from 3.00-6.00pm for Brew Monday.

Mischief will be fundraising at their hit comedy shows The Play That Goes Wrong and Magic Goes Wrong.

To thank and celebrate Samaritans volunteers across London, Mischief have invited over 400 volunteers to see their West End shows in January.

Mischief’s top movie episode from their globally successful improvised online movie series Mischief Movie Night In will be restreamed as a fundraiser available on-demand throughout January.

In a bid to power through the cold winter months, Mischief are supporting Central London Samaritans to bring smiles and laughter to people across their hit comedy shows on stage and screen as part of Samaritans Brew Monday campaign.

Whilst the third Monday in January is sometimes referred to as ‘the most difficult day of the year’, Samaritans Brew Monday hopes to highlight that there’s no such thing as ‘Blue Monday’ as people can feel a range of emotions any day of the year. Brew Monday encourages people to reach out to someone they care about for a cuppa and a catch up.

Mischief, the award-winning company behind The Play That Goes Wrong and BBC comedy series The Goes Wrong Show are serious about silliness and proud to be supporting Central London Samaritans Brew Monday campaign, and are fundraising throughout January.

Alongside audience donations at West End Theatres, an on-demand fundraising restream of ‘The Wizard of Paddington Station’ from their internationally successful improvised movie series Mischief Movie Night In, will be available to restream from 10am on 14 January, until 31 January. A 48 hour on-demand restream pass can be purchased for £7.50 from MischiefMovieNightIn.com with all profits donated to Samaritans. The improvised movie was created live on stage, with the audience choosing the genre, location and title, complete with rewinds, fast forwards, director’s cuts and an entirely improvised live score to laugh along to.

To thank Samaritans volunteers for the incredible time they give, Mischief have invited over 400 to see either of their hit West End comedies The Play That Goes Wrong or Magic Goes Wrong.

Although winter is thought to be one of the harder seasons with dark days and frosty nights, Samaritans volunteers hear similar concerns all year round from those that contact the charity. The main concerns include mental health and illness (46%), family (34%) and loneliness (28%)*.

So, to ensure nobody struggles alone, on Brew Monday or any other day, Samaritans is reminding everyone to check in on friends, family or colleagues. It doesn’t need to be a Monday or a cup of tea, it’s about connecting and really listening to each other.

Branch Director Amy Koheealle said: “We’re thrilled to be partnering with Mischief for Brew Monday. As we enter another difficult winter, it’s so important to look out for family, friends and work colleagues and to lend a listening ear. It doesn’t matter if it’s a Monday morning or a Thursday night, or whether you’re drinking lemonade, black coffee or apple juice. If you’re sharing a cup of something and listening, you’re making a difference to someone’s day.”

Jonathan Sayer, Mischief Company Director said “We are all absolutely delighted that Mischief is supporting Central London Samaritans this January for their Brew Monday campaign, helping to put smiles on people’s faces. Samaritans is a charity that has been helping so many people for such a long time, even more so after the past two years, so we really encourage everyone to sit down with a cuppa and have a chat and a laugh with their loved ones.”

or alternatively you can donate via Mischief  CLICK HERE TO DONATE.

Join the conversation on social media using #BrewMonday and why not donate while you’re there, you could help save a life.