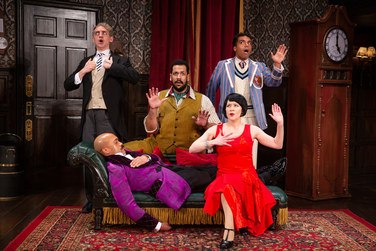 NOW PLAYING AT THE BROADWAY PLAYHOUSE THROUGH APRIL 3, 2022

We are pleased to announce the Chicago production, featuring a cast of local Chicago actors, will extend its limited engagement by nine weeks through April 3, 2022 at Broadway In Chicago’s Broadway Playhouse at Water Tower Place (175 E. Chestnut St.) to a total run of 16 weeks. Tickets for the added performances are on sale at www.BroadwayInChicago.com.

“I’m thrilled this cast of talented Chicago actors is bringing so much laughter and delight to our audience members,” said Broadway In Chicago President Lou Raizin. “Extending the run gives more Chicagoans a chance to enjoy this hilarious show and others a chance to see it again and again!”